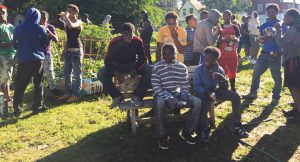 Boys travel from all around Milwaukee to the corner of 9th and Ring to be apart of We Got This. Photo by Dylan Deprey

“You’ve got one minute,” shouted Andre Lee Ellis, to a boy starting to pick up speed as he ended up taking off into a full sprint past the corner of 9th and Ring St.

“Once the gates closed, it’s closed,” Ellis shouted as the boy rounded the corner into Ellis’s yard to sign up.

The clock finally struck 8 a.m. The boy walked into the garden that caresses the corner of 9th and Ring. He was one of 102 boys ready to get their hands dirty on a Saturday morning, working for Ellis’s community gardening program, We Got This.

The young men wielded garbage bags and trash pickers. Some came from all around Milwaukee. Some arrived an hour early to make sure they were not going to miss out on making some money and having a chance to for the day. 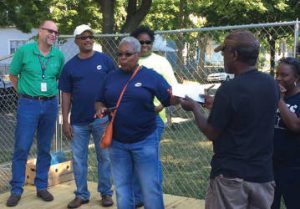 A group from WE Energies fundraised money to donate for the boys of We Got This. Photoby Dylan Deprey

We Got This was the product of Ellis paying a couple of boys in the neighborhood $20 each for helping with his garden. This eventually skyrocketed into We Got This, a project to put the “neighbor” back in the “hood.” The boys are paid through donations given throughout the day, sometimes having to post on Facebook for last minute donations.

On Saturday, July 16, Ellis received notability for the program and donations from Russ Feingold and a group from WE Energies.

Feingold made a stop from his campaign trail towards the US Senate to show his support for We Got This.

“It was inspiring to see so many young people spending a Saturday morning giving back to their community,” Feingold said.

Ellis said that it was great for Feingold to stop out but would prefer if he came around more often to talk to the boys and not just around campaign season. 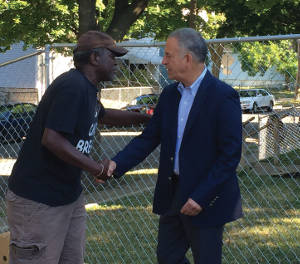 Andre Ellis welcomes Russ Feingold to speak the
accomplishment of We Got This. Photo by Dylan Deprey

“We’re not doing politics in the garden, we’re doing careers and that’s what made his visit important,” Ellis said.

A group of WE Energies employees also stopped to talk to the boys before their workday started. Russ Pagels, an Operations Manager at WE Energies, noted that line mechanics make around $23 per hour starting out. He stressed that bad decisions at a young age will effect the chance of being eligible for high paying jobs.

“We need to start talking to these kids at a younger age because when they get to that stage in their life to apply for a job and have a poor driving record or criminal record, we can’t hire them,” Pagels said.

“If I can say a couple words to put them in the right direction and to keep their records clean, that is why I’m here,” Pagels said.

Scott Brooks is a volunteer for We Got This. He started donating to the program after hearing about it from a coworker last year. This year he freed up time and volunteers every Saturday.

“The big reason I volunteer is because I came from a family similar to these boys,” Brooks said. “I had a single mother, not a lot of money and we had to scrape a little. But I’m blessed, so I try to bless others.”

Brooks noted that other then having the boys stand at attention Ellis kept a tight ship. He said that having a zero tolerance for being late is a perfect way to exercise the boy’s time management skills. “Being a supervisor at where I work and seeing people punch the clock, I can see that being instilled here,” Brooks said.

As the boys went off to clean the surrounding blocks of the neighborhood before working in the garden, Ellis told them how proud he was of those going off and finishing school and getting jobs.

“If your mind ain’t focused on a successful life, you’re missing out,” Ellis said.